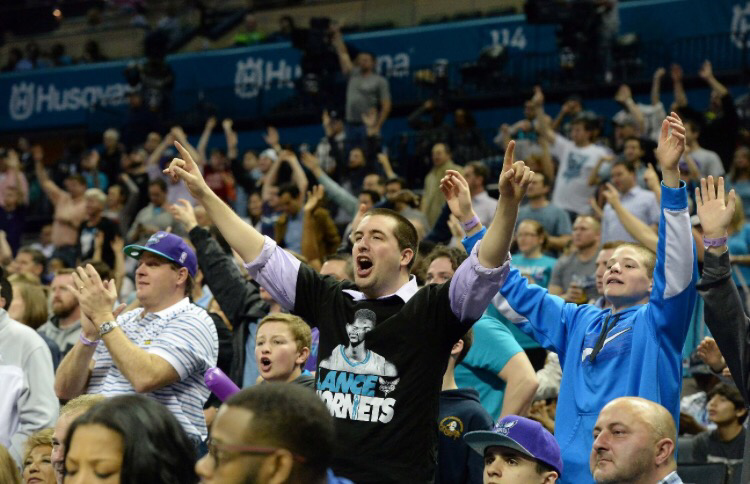 We (Buzz Bros) went out the other night to a well known Charlotte establishment to eat and watch the Hornets vs Spurs game (we won’t name the establishment on the blog because we sufficiently roasted them on Twitter). We were in the main room of the restaurant and it had more than 15 TV’s. There was 1 TV playing the Hornets game and we were seated across the room with several obstructions and poles between us and that single TV. So we asked our server if one of the 6 adjacent TV’s closer to us (all showing Seahawks vs Lions game) 1 inch apart from each other could be switched to the Hornets game. She went and asked her manager and we were told that he wouldn’t switch it. So we asked to be moved to a table closer to the Hornets game.

We were slightly frustrated because 1 of the 6 TV’s (all next to one another) could easily be changed and EVERYONE including the 1 Seahawks fan wearing gear could still watch the game from every imaginable angle. We didn’t get upset or say anything until the TV that we asked to be changed was then changed 5 minutes later to motor cross… yes, you read that right… motor cross is ok but not the CHARLOTTE Hornets!

This has been less of an issue since the return of the Hornets name but it is still a problem that rears its ugly head and it baffles us! Charlotte businesses were not just a year ago talking on the news about how excited they were for the potential economic impact that an All-Star game would have for them but won’t accommodate CHARLOTTE Hornets fans! So we want to help Hornets fans!

This is why we created the “Play Charlotte” page. Not only is it there to call out those places that won’t support local but will also showcase and assist those establishments in the Queen City that are Hornets Fan Friendly!

If you own a local business and you show Hornets and Panthers games we encourage you to contact us at bringbackthebuzz@gmail.com so that you can take over Play Charlotte and we can share you with the Hornets Community! OR If you are a fan at a place who won’t show the game or you want to show love to a place that is please tweet at us!

This is how we as fans can change the culture!

Small market is not an excuse anymore. We were awarded the All-Star game, look at the successful Greg Olsen campaign. Businesses were quick to benefit from the market flourishing but turn around and use it as an excuse not to accommodate. You can’t have it both ways and not expect to be called out.

One thought on “If You Are a Charlotte Restaurant, It’s Time for You to Play Charlotte! ”