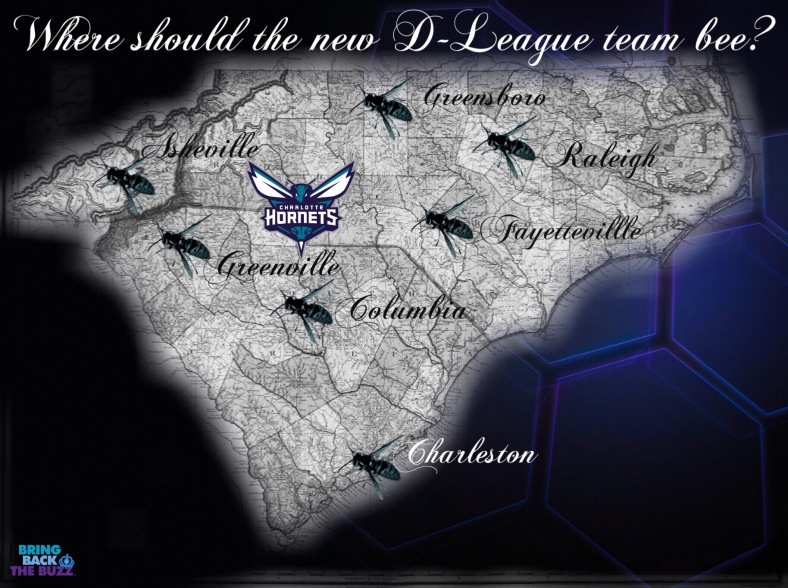 Hornets Sports & Entertainment announced on Monday that they intended to launch an NBA D-league team starting the 2016-17 season. This is great for Charlotte to finally have a team that we can pull players from and send our young developing ones to without having to send them half way across the country to find a willing location.

They listed 7 potential cities including Asheville, Fayetteville, Greensboro and Raleigh in North Carolina as well as Charleston, Columbia and Greenville in South Carolina.

Each city has strong cases for why they think they deserve a D-league team. Greensboro is a proven town when it come to minor league teams, have their coliseum and is the 3rd largest city in the state. Raleigh is the darling of the state and is rewarded everything from the majority of tax payers money to the only professional team in the state with a Championship.  Charleston, Columbia and Greenville would help spread the fan base to the old Palmetto State much like Spartanburg training camp has done for the Carolina Panthers.

Asheville is the tourist trap of the state. Already has experience with an NBA D-League team called the Asheville Altitude that existed from 2001-2005 and won the league title the last two years of its existence and Hornets already do the majority of their off-season training in Asheville. They even have an already existing grassroots campaign that has been fighting for a team for over a year called “Beelieve in Asheville”

“The team lost at least $100,000 in each of the four seasons and saw declining attendance each year before leaving in 2005.

Our plan for this D-League team is to give the fans a 3 step interactive chance to voice their opinion to the Hornets organization.

SOOOOO The polling begins with the City!

12 thoughts on “POLL: 7 Cities; Where should the Hornets D-League team play?”