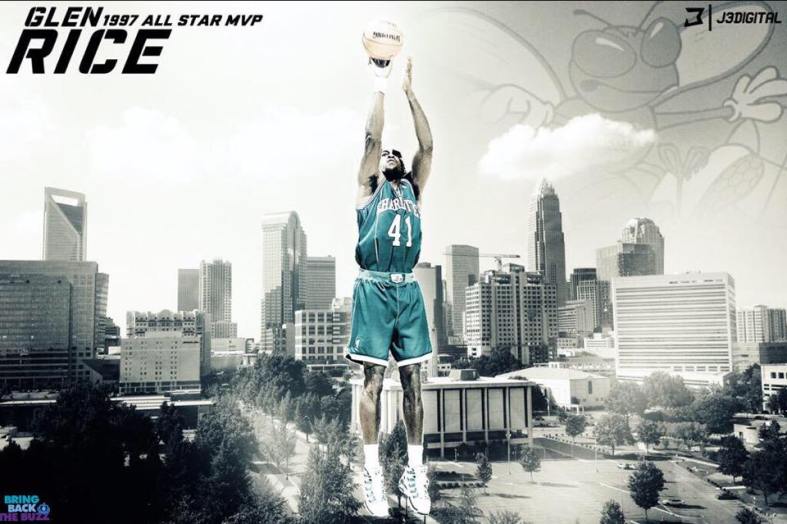 What makes the difference between an athlete and a legend? Is it their ability to score, pass, and dunk? Maybe, or is it something a little deeper that is ingrained in their personality? Every athlete worth anything has a set of morals and values that makes them the person on and off of the court, and every true fan will see it. Many things influence them, friends, family, environment.

As a kid in the 90’s, I watched my Charlotte Hornets loyally, passionately, and religiously. For me personally, their was one player who set my foundation as a Hornet fan. We all have one, every fan does. That player who you admire and love to watch, the player who you defend to the very end after a rough loss to your friends. A player who you scream and cheer your lungs out for every time they take the court and put up a shot.

For me, their was one. His name is Glen Rice. Rice always took the court and left everything on it. when I would watch him, it was like some kind of x-factor stepped on the court with him like a shadow that made the team better, like a glow. The best part was it was infectious in his teammates, and when Rice was down, vice versa. He was a role model for me personally on and off the court, and it was because of him, and other players to come that I became so passionate about basketball and the team itself.

I was lucky enough to interview the Charlotte Hornet Legend about his time with the team, as well as advice for the current generation of Charlotte players and fans.

I will never forget going to my first game wanting to watch you play. To a 90’s kid, the NBA was life. There was no higher praise than playing as your favorite player in a video game or having their trading card at the top of the stack so all your friends could see it, or playing as them in a backyard pick-up game. Glen Rice was that for me, I know I was just a kid and it doesn’t seem like much, but if it wasn’t for Rice, Muggsy, Dell, Barron Davis, Alonzo, and Anthony Mason. I know for a fact I would not be the athlete, sports writer, fan, and man that I am today. Thank You for that.