The day that all of Hornet Nation has anxiously been waiting for, the return of starting pg Kemba Walker! Walker is the face of the franchise and has had a pretty outstanding season so far making HUGE last second buzzer beater shots for the win, creating big assists, as well as being the heart of the team.

However, what happens after your starting point guard gets hurt and is replaced with another hot shot with a headband? Some times when there are two alpha players starting there can be tension that is not always productive or positive for the whole team.

So the big question is how the two starters, Walker and Williams, play together?

Honestly both players are very dynamic on the court, have outstanding ball movement and can make big shots when they matter. Between the two I surprisingly like Mo Williams play style more than Kemba’s by a small margin.

Williams has a way of not only getting the ball to his teammates in ways that surprise everyone watching, but has a way of making that play style contagious to other players. This “Mo-Williams Syndrome” has caused the Charlotte Hornets to have had 3 triple doubles in the past 3 games! That is huge motivation for the Hornets at a much needed time with the race to the playoffs.  It shows that not only can Mo is not concerned with just making his own shots, but making sure that the ball gets in the hoop any way he can, by shooting, assisting, or dunking!

When Kemba does return, hopefully the two stars can create a monster force instead of a massive collision. I think that both of the starters have enough space and since their main focus is to win, they will be more than willing to spread the ball.

Tonight the Hornets take on the Brooklyn Nets on the Road and the victor will move up in the ranks in this race to the playoffs! 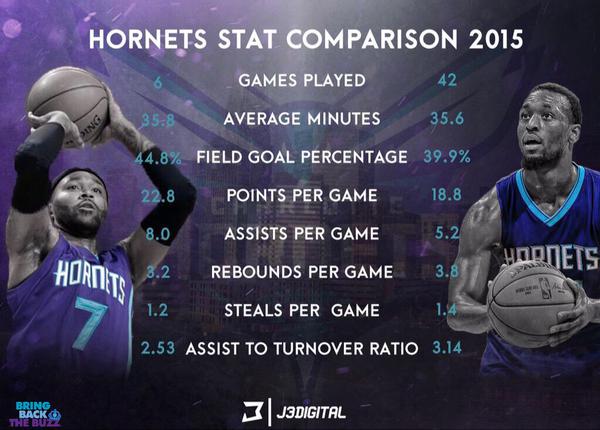 (designed by our new photo editor Joe Shomaker aka @J3_Digital)