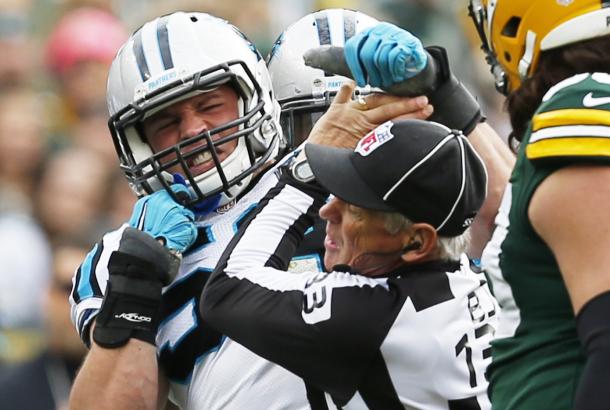 MONDAY MORNING QUARTERBACK!! Well you see what had happen was…well nothing happened. By the time the Panthers got their first first down of the game GB already had 21 points. First 3 GB drives touchdowns. First 3 Carolina drives 3 and outs. Penalties on third down killed us early in the game. Aaron Rodgers killed us the whole game. And the sorry ass secondary will kill us ALL season long.

I mean seriously these guys couldn’t stop the charlotte catholic cougars passing attack (and they throw like 5 times a game!) Well why does the secondary suck? Because it’s completely different from last year. Dave Gettleman got rid of starters and replaced them with backups! Not going to stop elite quarterbacks with second stringers. I mean seriously roman Harper looks old even with a helmet on. Even after this massacre and demoralization there is a slight hope.

We play in the NFC South! We are still in first thanks to a choke by New Orleans. Luckily we play a struggling Seattle this week but no QB will struggle against our secondary. Defense either cut Godfrey this week or just don’t play the man. Like I’ve said before all we have to do is make the playoffs. And that goal is still a reality! Keep pounding black and blue. Maybe practice some Defense this week for the sanity of panthers fans everywhere. Keep pounding people.