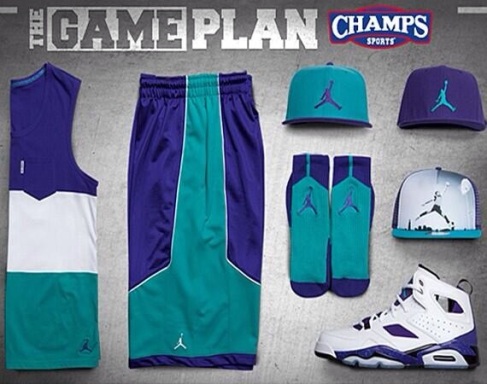 The definition of a “code” is, a  system of words, letters, figures, or other symbols used to represent others, esp. for the purposes of secrecy.

That “Jordan Code” is now APPEARING to be easier to decipher. The decision on whether to keep the name, Charlotte Bobcats has till now remained a mystery.  The Bobcats have been very quiet, and understandably so, since another franchise is currently using that name. I expect that that silence will continue until 4/17, when the Hornets name is officially up for grabs. Recently, we have seen the purging of Charlotte Bobcats colored Jordans at the Heat game, an announcement of a “Town Hall” meeting on 4/15 with the future NBA commissioner Adam Silver, and the signaled dropping of an entire teal and purple Jordan line also on 4/17, coinciding with the end of the Charlotte Bobcats season.

Today, a friend of mine received an invitation from the Charlotte Bobcats to  attend a presentation about “the Bobcats future” to be made prior to the last game, next Wednesday (he received 2 tickets and I will be attending). Thursday, 4/18, the day after the season is over, the Charlotte Bobcats will host and Open House…the final clues seem to be falling into place.

As in the past, we caution you that this may be one giant, big, huge, coincidence, OR  we are on the brink of becoming the Charlotte Hornets!!!

We remind you that we have been wrong before,  but…we have also been right

8 thoughts on “Cracking the Jordan Code: the last clues are falling into place”