I don’t really know what to make of the last week for the Hornets. They started off with a great win over Memphis and followed that up with a solid home win over a good Bucks team. But the second half of the week has been a little rough with losses on the road to the Spurs and Timberwolves. The loss to the Spurs was somewhat expected, but getting blown out against the Timberwolves off a day of rest when Minnesota was playing on the second night of a back-to-back is less than ideal.

This week is a much lighter week, but still includes a tough trip to Boston for a meeting with the red-hot Celtics. Following that game on Friday, the Hornets will have 4 full days of rest to prep for their meeting with LeBron and the Cavs. Let’s get on to the scouting for the Knicks and Celtics.

On Tuesday night, the Hornets will open their season series with the Knicks. Last year, the Hornets went 1-2 in 3 games against New York, with both losses coming at MSG. If the Hornets hope to compete for a playoff spot in the East, then they will need to post a better record against the Knicks this year. Meanwhile, the Knicks hope to continue their surprising start with a win over Charlotte.

The Knicks have been off to one of the more surprising starts in the league this season. After losing Carmelo and with all the madness that surrounded their offseason, little was expected of them. Yet here they are 9 games into the season with a record above .500.  They started out 0-3 but have won 5 of their last 6, including wins over the Cavs and the Nuggets. To an extent, they have found success beating bad teams like the Suns and the Nets, but they have still managed to win. Like Charlotte, they will be coming into this matchup off 2 days of rest. 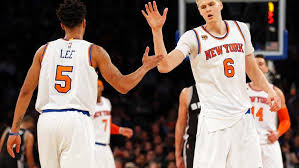 The Knicks start and end with Porzingis. In their 5 wins this season, Porzingis has been the highest scorer in 4 of them. He is currently averaging 29 ppg, 8 rpg, and almost 2 bpg. In their last 2 games, he scored 37 and 40 respectively. Needless to say, he is playing extremely well in his second season and will definitely taking some stopping if the Hornets hope to contain him. Outside of Kristaps, the Knicks are led by Tim Hardaway and Enes Kanter who are both averaging over 14 ppg this season. Kanter in particular has been extremely efficient and is posting a fg percentage over 63% and has chipped in with 10.5 rpg as well. Another player worth mentioning is a player that we all know well from his time in Charlotte, Courtney Lee. Lee is never going to light up the score board but he is an efficient 3 and d player who finds ways to contribute and help the team win.

One Positive for the Hornets: 32% 3-point fg

The Hornets have struggled against teams who shoot the 3 well, as seen in the games against the Rockets and the T-Wolves. But in this matchup with the Knicks, the Hornets will be facing the 3rd worst 3-point shooting team in the league. They are currently hitting the deep ball at a 32% clip, which means the Hornets should be able to force them to beat them from the interior, which is where the Hornets traditionally excel defensively.

The Knicks are the second-best team in the league at turning their missed shots into second opportunities on offense. The Hornets are one of the best defensive rebounding teams in the league, but will have their work cut out for them in this one against a club who gathers 27.2 % of their misses. 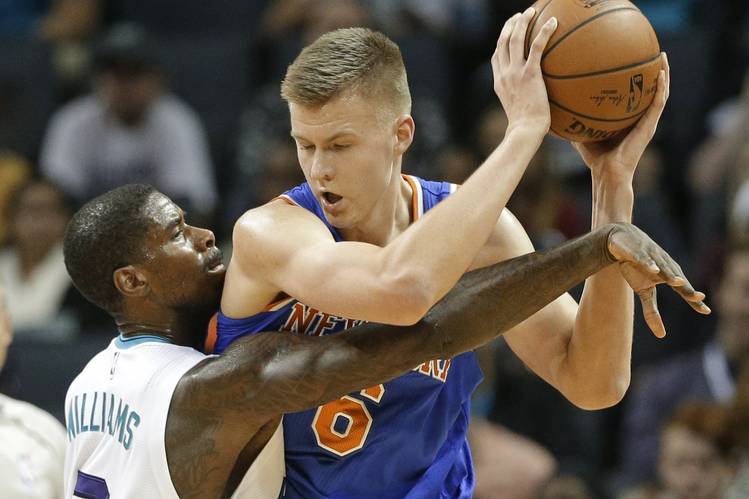 Marvin Williams v. Kristaps Porzingis. This is a tough one for the Hornets. For the last few years, they have utilized the smaller Marvin Williams as a stretch 4 to help space the floor and get some more athleticism on defense. But this is a tough matchup due to Porzingis’s height and his ability to score in so many different ways. Clifford will have to decide if he wants to roll with Marvin here or maybe try MKG, but he’s even shorter than Marv. Whatever happens, the Hornets will need to find a way to slow him down if they hope to win this matchup.

This game, similar to the games against Milwaukee will come down to whether or not the Hornets can make someone else beat them. Hopefully, they will come out with more energy than they had against Minnesota and get some early offense. If they can get some stops, they should have a good chance to pick up a much-needed road win. On the flip side, if they do not commit to defending the paint, they might struggle against a team that they need to beat.

Similar to the Knicks, the Celtics started off the season poorly with 2 losses right out of the gates. Since then, they have proceeded to win 8 straight and take their place at the top of the NBA standings. They have big wins against the Spurs, the Thunder, and a blowout of the Magic on Sunday. Not only have they been winning games, but they have been winning them fairly easily, the closest margin of victory during their streak is 6 points. They will be coming into this game following an away matchup with Atlanta on Monday and a home meeting with the Lakers on Wednesday.

As is typical of Brad Steven’s coached teams, the Celtics have been getting solid contributions from numerous players, but at the heart of it all is Kyrie Irving. The summer acquisition has picked up the hole left by the Hayward injury and leads the team in ppg, apg, and spg while still shooting over 44% from the field. Behind him, the Celtics have Al Horford filling up the stat sheet with a stat line of 14.7 ppg, 9rpg, 4.3 apg. Couple these two guys with the scoring burst of Jaylen Brown and Jayson Tatum and you begin to see why the C’s have started the season so well. They are getting contributions for numerous guys and it makes them hard to stop.

The Celtics have been extremely successful in the early weeks of this season, but it is not really because of their offense. They are in the bottom 10 in the league with 102.9 ppg, and the Hornets strong defense should be able to cause some problems for the Celtics.

One Negative for the Hornets: 94.7 drtg

I could use almost any defensive stat in this spot, and the Celtics would probably be in the top 5 in that category. They are the best defense in the league by a fairly wide margin and there are numerous stats to back that up. Overall, they have a Defensive rating of 94.7, which is the best in the league by almost 3 full points. 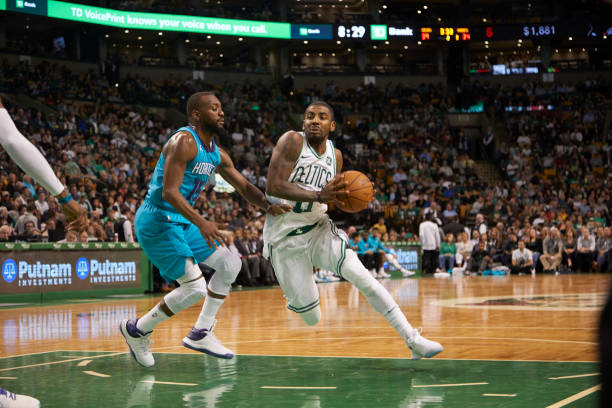 Kemba Walker v. Kyrie Irving. What more could you ask for in a point guard matchup? Two of the best point guards in the league will be going at it in this one and there are sure to be some slick highlights. Both guards are similar in play, with Kyrie being slightly better at getting to the rim and Kemba being a better shooter. Either way, these two are two of the very best and it’s gonna be a lot of fun to watch them go at it. If Kemba can outduel his counterpart, it will go a long way towards the Hornets locking up a victory.

Away at TD Garden against the Celtics is going to be one of the toughest matchups that the Hornets will have all season, but if they play well for a full 48 minutes, they might have a shot at taking down the East leaders. It figures to be a defensive slugfest, but should still provide lots of fireworks.

Predictions for the Week:

My predictions last week were a little off. I correctly predicted the games against the Bucks and the Spurs, but was surprised by the win at Memphis and the loss to Minnesota. Hopefully this week, the Hornets can get a couple of quality wins and go into their longer break with good momentum.

W @ Knicks: Porzingis will be tough to stop, but I think the Hornets will be able to put up enough points in this game to get a much-needed win on the road.

L @ Boston: Boston has won 8 in a row for a reason, and I don’t think that the Hornets will offer enough offensively to win at the Garden.

Hope I’m wrong and we win both games! Have a good week everyone!