That’s what Kemba Walker had to say following the Hornet’s win over Philadelphia on April Fools’ Day.

That quote summarizes more than just the 76ers game, but the entire season. There have  been times this season where it has seemed as if the Hornets were completely out of a game, only to make a late push and come back. The team seems to always be in that mindset of “we can win this game,” which has led to the best season Charlotte has seen since rejoining the league.

Although the Hornets have had a great regular season, the team is still looking for one thing; a playoff win. In their eleven seasons, Charlotte has only made it into the playoffs twice. In the franchises’ playoff debut in the 2010 playoffs, the Bobcats were swept by Dwight Howard’s Orlando Magic. In their second playoff appearance in 2014, the team was swept yet again, this time by Miami’s big three of Lebron James, Dwayne Wade, and Chris Bosh.

So what makes this year different and how will the Hornets be able to celebrate their first playoff victory?

The first thing you need to know is that the Hornets are hot. In March, the team recorded an impressive record of 13-3. Thirteen wins, a team record for W’s in a month, led to Steve Clifford winning Eastern Conference coach of the month. The highlight of the winning streak was March 21’s win over the Spurs. The Hornets came back from 23 to beat San Antonio 91-88. The comeback was the worst largest lead surrendered by the Spurs in the Tim Duncan era.

Next, Charlotte has completely revamped their offense, which led them to 109.2 PPG in March, second in the East. This graphic which was featured in a fantastic SB Nation article, shows the substantial improvements Charlotte’s offense has made this year. The full article can be found here: http://www.sbnation.com/2016/3/29/11320144/charlotte-hornets-breakdown-analysis-offense-three-pointers-steve-clifford.

Charlotte has clearly made great strides in their ability to shoot from last year. Marvin Williams has been one of the biggest contributors to the increase in 3’s as he is having a career year shooting the ball. William’s fantastic year puts him in elite company in Hornets history as him and Jamal Washburn are the only to record 100 threes and 500 rebounds in a season.

Another reason for the Hornet’s success is that the team doesn’t have to rely on one player for production. Kemba Walker is the highest scorer for Charlotte at 21 PPG, but there are multiple players on the roster that can step up at any time to lead the team to a win. This was shown in the Spurs game where Kemba struggled shooting a mere 2-11. Jeremy Lin stepped up in his place dropping 29 points on the second best team in the NBA.
One of the biggest downfalls of the 2013-2014 Bobcats whom fell to the Heat was that they mainly depended on Al Jefferson for offensive production. When Big Al was hurt with a foot injury during the playoff series, the team struggled to find ways to put up points. During the 13′ season, only five Bobcats averaged over 9 points a game; Al Jefferson, Kemba Walker, Gerald Henderson, Gary Neal, and Ramon Sessions. 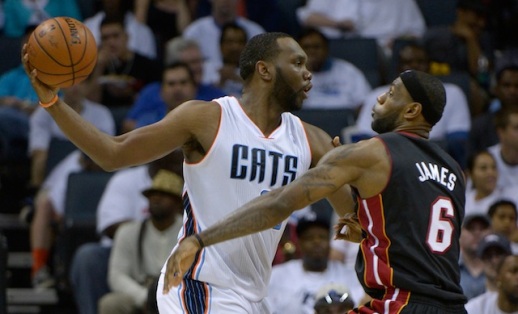 (http://goo.gl/XAE9Wz)
This year though, the scoring is more evenly spread amongst the team. Five players are averaging over 10 PPG; those of which are Kemba Walker, Nic Batum, Jeremy Lin, Al Jefferson, and Marvin Williams. It’s also important to note the production of Courtney Lee, Cody Zeller, and Jeremy Lamb whom all average nine points a game.
The Hornets also have for the first time ever, a true home court advantage. When Charlotte scores over 100 points at home, chances are they’re taking home the W, as their record in these games is 22-1. The Buzz is growing around the team, during the year of their last playoff appearance, the average attendance at games was 15,234. That number has greatly grown compared to this years average of 17,466 attendees, a difference of 2,000 more fans at each home game.

Now that the Hornet’s have secured a playoff spot,

The Hornets have officially clinched a playoff spot. pic.twitter.com/vUVti4tSyF

The team will look to finish strong in their last few games. What playoff spot Charlotte will finish with is still a great mystery due to how close the East is. At one point they had worked their way up to third, but a loss to the first place Cavaliers dropped them all the way to sixth. Right now it looks like the Hornets will most likely have to play either the Heat, Pacers, Celtics, or Hawks.

Fortunately for Charlotte, there are some great opportunities to pick up some wins before the end of the season. After a tough game in Toronto on the fifth, the Hornets will face the Knicks, Nets, Wizards, and Magic. All teams that Charlotte has found success against this year. The toughest remaining game is April 11’s matchup against the Celtics in TD Gardens.