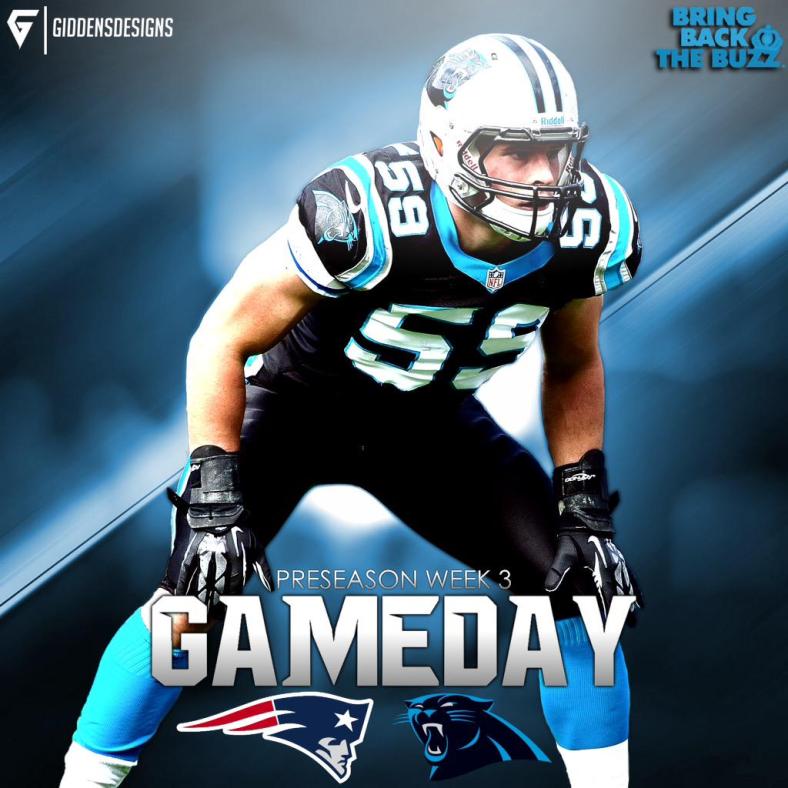 In the NFL, the third week of the preseason serves as a dress rehearsal for the live rendition, and brings with it a set of expectations for the season to come. For better or worse, each franchise’s long-brewing questions will at last be answered, and fans will see starters play their most significant snaps until the regular season begins. Tonight, the reigning Super Bowl champions come to Charlotte where they’ll face a team with as many unanswered questions as any in the league, and a fanbase eager to see who will survive this weekend’s roster cuts. Here’s what to watch for in tonight’s matchup:

WHICH WIDEOUT WILL STEP UP?

After losing a rising star in Kelvin Benjamin, the Panthers’ wideout play tonight will factor in heavily to what the team does with the position going forward. The front office has been adamant about finding answers within it’s own roster, but there’s likely to be a veteran on the free agent market who can help this team’s passing game, especially if second year player Corey Brown continues to struggle. It’s also one of Jarrett Boykin’s last chances to show his hometown that he’s worthy of a spot on the final 53, as his production has been inconsistent since signing with Carolina in May. This group has been thrown into the spotlight since Benjamin’s injury and will continue to be under close watch throughout the season. With rookie Devin Funchess unlikely to play tonight, there are plenty of targets to go around to those battling for roster spots.

A key cog in the Panthers’ postseason run in 2014, Fozzy Whittaker may now find himself on the roster bubble as final cuts approach next week. Although the coaching staff maintains that the depth chart hasn’t shifted much since the beginning of camp, inspiring play from a trio of new runners will make the decision a hard one. Rookie Cameron Artis-Payne, free agent acquisition Jordan Todman, and undrafted free agent Brandon Wegher have each made an impact in their own right through 2 weeks of the preseason – and each bring a different caveat of value to the team. With Todman on pace to be the team’s lead kick returner, and Artis-Payne appearing to be a polished 3-down backup to Jonathan Stewart — the final spot will come down to Whittaker and Wegher, who’s now racked up 3 touchdowns over the past 2 weeks. While Fozzy Whittaker made arguably the franchise’s most important play last season, Wegher has since become a fan favorite and likely would be quickly claimed by another team if transferred to the practice squad — which leads me to believe he has more than a fighting chance to earn a spot on this roster. Ultimately, it will come down to how the duo can contribute on special teams.

NEW FACES IN THE SECONDARY

After adding veterans Charles Tillman and Kurt Coleman in the offseason, Carolina looks to have more depth in the secondary than it’s seen in several years. Second year standouts Bené Benwikere and Tre Boston are sure to factor in coming off impressive rookie campaigns, but neither will find themselves in the starting base package to kick off the season. Look for Kurt Coleman to get the start beside Roman Harper, with the high-ceiling Boston breathing down his neck. Benwikere recently stated that he’d rather play outside the numbers than in the nickel slot where he currently lines up, but it’s his versatility that makes him a vital piece to this defense. Either way, the front seven will surely appreciate having more depth and experience behind them than in years past. Tonight they should have a great opportunity to make plays, against a team with it’s top 3 wide receivers out with injuries.

OFFENSIVE LINE TO BE TESTED

A clear team weakness last year has continued to show vast improvement, dating back to the final five games of last season. The group has looked solid thus far, creating viable pockets against the talented defensive fronts of the Bills and Dolphins. That may have looked promising, but it’s important to note that defensive coordinators don’t utilize any complicated schemes in the first two games of the preseason. Still in the process of evaluating talent, there aren’t yet any exotic blitzes or stunts in the gameplan, and thus are much easier to read in pass blocking situations. The group’s first true test will come tonight, when the Patriots bring a more complex scheme to the field, aiming to find which players grasp these concepts faster than others. If the offensive line produces another good showing tonight, I’ll be sold — and it will be a great sign for this offense going forward.

One thought on “Patriots @ Panthers: What to Watch For by Austin Stallings”