The Charlotte Hornets (18-25) took full advantage of a favorable schedule during a weeklong home stand, winning three out of four games to push their record in their last nine contests to 8-1 following what had been a miserable start to the season.

The Hornets dropped a very competitive game against the defending champion Spurs, but then they went on a three game win streak, knocking off the Pacers in overtime, smashing the Timberwolves in a Monday matinee and finishing it off by withstanding a late charge from a scrappy Miami Heat squad.

More impressive than the record is the return of the stingy Charlotte defense that became a trademark for the team during last seasons run to the playoffs.  The Hornets have held their last three opponents to 80 points or less, becoming the first team in the NBA to do so since March 2013. They have also held their opponents under 100 points in 10 consecutive games, the longest streak in the NBA this season. 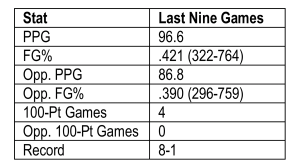 On top of the Hornets rediscovered defensive intensity, they are also beginning to work their way back to full strength.  Lance Stephenson returned to the lineup last week as did Al Jefferson.  While Kemba’s knee may be a lingering issue for the season, he did return in the Hornets last game against Miami to the tune of 15 points.  The Hornets’ season will go as Kemba goes, so Charlotte has to hope that his knee will hold up throughout the rest of the season as the team makes a push to get into the playoffs.

Speaking of playoffs, if the season ended today, the Hornets would be tied for the eighth spot in the eastern conference with the Nets.  Brooklyn and Charlotte are two teams headed in different directions and it seems that the Detroit Pistons, surging since the release of Josh Smith, will be the Hornets best competition for one of those last playoff spots.

WHAT TO MAKE OF THE PAST WEEK…

What makes the Hornets recent run of success that much more impressive is the fact that they have won despite the revolving door in the training room.  Charlotte has won with different lineups as Big Al, Kemba, Lance and others have dealt with various injuries.  The extra minutes have served to fortify the reserves as they have gotten more experience with the different lineups, giving most everyone the opportunity to develop chemistry within the team.  The weeklong home stand has given players the chance for much needed rest and it has provided other players with the time to rehab their injuries.

Among the players that have benefitted from the extra minutes is Biyombo, who is in the final year of his rookie contract.  Biz has been up and down throughout his career and, just when most thought that he may never live up to his potential, he has really begun to put together an impressive run himself.  Over his last five games he has averaged 10.8 points and while shooting .606% from the field, 11.8 rebounds and 2.2 blocks per game.  I’ll focus more on Biyombo’s season and his impending future with the Hornets in more depth after this weekend, but he has definitely shown a vast improvement, and that can only be encouraging for Charlotte moving forward.

Coach Clifford has brought Stephenson back from injury slowly, yet it appears that he is gelling with his teammates better recently.  Maybe it helped that he had some time to step away from all the expectations and trade rumors and just watch and become more familiar with the system.  Either way, its nice to see him feeling more comfortable with his game, particularly since it seems, at the moment, that he will remain on the roster.

The Hornets finish out the month with a decent slate of games, starting with a visit to Cleveland to face LeBron and the Cavaliers on Friday night.  This will be the third matchup this season for these two teams; Charlotte has dropped their previous two meetings; 88-97 in Cleveland and 87-91 at the Hive.

The Cavaliers have had a roller coaster season with their new additions and each time it seems they’ve found their way, they drop another game that makes us wonder if this experiment can work out.  Cleveland remains a tough opponent for the Hornets though, and they will have their hands full with the Cavs big three of Kyrie Irving, Kevin Love and LeBron James.  MKG figures to draw the defensive assignment on James, making this the matchup to watch for this game.

It will also be interesting to see how the Hornets handle Love as he tends to stretch the floor with his shooting and playmaking skills.  Hornets centers Jefferson and Biyombo do most of their work in the post so, most likely, either Marvin Williams or Cody Zeller will draw the assignment there.

The Hornets will have to slow the Cavs transition attack to gain an advantage, and Cleveland’s offense has a tendency to stall out, so as long as the Hornets can keep up their suffocating defensive pace, they have a good chance to come out on top in this one.

The Hornets are back in action the next night as the face the New York Knicks for the final time this season at the Hive.  The Hornets are 2-1 in the teams previous two meetings with the last matchup being a complete blowout as Charlotte ran away 110-82.  At one point in the game, the Hornets led by over 40 points, while that may not be the case this time, Charlotte needs to capitalize on their opportunity to get another victory under their belt against a team that is reeling and shows no signs of pulling it together anytime soon. 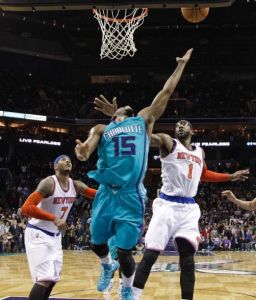 New York remains near the bottom of the league in most categories but they are particularly awful on offense, with the day-to-day Carmelo Anthony being the only real offensive threat the Knicks have.  Look for Charlotte’s defense to snuff this one out early, I assume this Knicks team will have a hard time finding a way to score against a hot Hornets D.

The Hornets get a few days off to rest until Wednesday, when they face the San Antonio Spurs again, this time in Texas.  Charlotte played a strong game the last time these two teams faced each other with an energetic Biyombo leading the way with 12 points, 15 rebounds and five blocks while filling in for the injured Jefferson.

Manu Ginobli gave the Hornets all kinds of problems in their matchup in Charlotte last week with 27 points on 10-14 shooting.  Somebody always steps up to get buckets for the Spurs against the Hornets and with the way San Antonio moves the ball gives them a myriad of options to score with plus, the Spurs have young forward Kawhi Leonard back in the lineup this time around.

The Hornets travel to Denver to close out the month of January, and this gives them another winnable situation on the road.  The Nuggets have had their share of problems so far this season yet they have managed to carve out a decent record in the daunting western conference.  Denver maintains an uptempo pace on offense, scoring almost 102 points per contest.  That offense, combined with their strong rebounding is going to test the Hornets defense.

Charlotte will have to contend with the “Manimal” Kenneth Faried, Denver’s strong and ultra athletic forward down low.  Most recently, he is coming off a 26 point, 14 rebound performance against the Spurs and he tends to have good games against Charlotte, so look for this to be an important matchup to watch.  Walker vs. Ty Lawson will be a great matchup in this game as well since both point guards heavily dictate the pace of their respective teams offenses.

The Hornets have an opportunity to go 2-2 or even possibly 3-1 to finish out the month, which would punctuate a remarkable turnaround for a Hornets team that came into 2015 on life support.  Enjoy the action Hornets fans and, until next time, KEEP BUZZING!!!