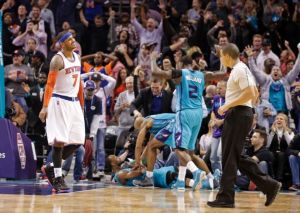 The Charlotte Hornets (5-15) used a gut wrenching dramatic finish to punctuate a 103-102 victory against the New York Knicks (4-17) Friday night to snap a 10-game losing streak.

The Hornets played a very strong first half en route to a 57-45 halftime lead.  Al Jefferson began abusing Amar’e Stoudemire in the post and Gerald Henderson began to heat up for the Hornets in the third quarter to push Charlotte’s lead to as much as 21 points before Carmelo and the Knicks went on a crazy run in the fourth quarter while the Hornets struggled to make anything happen on the offensive end of the court.  It was eerily reminiscent of the recent string of second half collapses, and I don’t know about you, but my heart sank in my throat as it began to look like an all to familiar scene.

The Knicks’ comeback was punctuated by a three pointer from the corner by Anthony, quieting the home crowd and giving New York a one point lead with 40 seconds left on the clock.  That set the stage for Kemba Walker, who had already shown a penchant for hitting big shots earlier this year in the Hornets opener.  With four seconds left on the clock, Walker took the inbounds pass at half court, faked right, and drove past the Knicks’ Pablo Prigioni into the left side of the lane.  Amar’e Stoudemire chased after Walker, but the Hornets crafty point guard went in for a left handed, buzzer beating layup to give Charlotte the victory.

While the Hornets once again gave up a large lead down the stretch, almost giving away another victory, they were able to pull this one out in the end.  Walker’s face after the game winner said it all as he sported a look of relief as the Hornets got the monkey off their back after a tough stretch over the past month.

Walker finished the game with 11 points, four rebounds and four assists as he noticeably struggled with a lingering injury throughout the game.  He also had a huge third quarter block on the Knicks’ Jose Calseron, coming out of nowhere to swat the shot, much to the delight of the crowd. 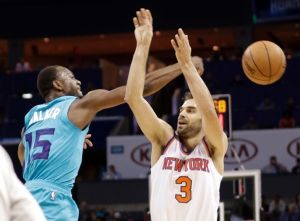 Henderson led the Hornets in scoring with a season high 22 points on an efficient 8-10 shooting from the field.  Jefferson had a strong showing contributing a double double with 16 points and 13 rebounds and Lance Stephenson had 16 points of his own to go with six rebounds and six assists.  Gary Neal had 13 points off the bench, giving the Hornets some much needed scoring from their reserves.

Anthony led the Knicks with 32 points, seven rebounds and four assists and, at times, it seemed he was the lone hand carrying a struggling Knicks team.  Tim Hardaway Jr. and J.R. Smith chipped in 13 and 14 points respectively off the bench for New York.

The Hornets will have the next four nights off before they are back at the Hive against the Boston Celtics on Wednesday night.