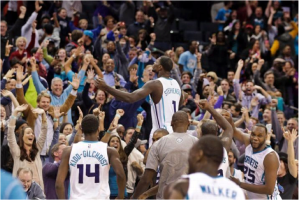 The Charlotte Hornets (3-3) gave the home crowd at the Hive another exciting show on Friday night, as they beat the Atlanta Hawks (1-3), 122-119, for their second win in a row.

The Hawks went on an 11-2 run to start the game, meaning the Hornets found themselves in a familiar position for them this season, playing from behind. The Hornets got a spark off the bench, but the Hawks moved the ball well in the first quarter, spreading the ball around and knocking down open jumpers en route to a 29-22 lead after one.

The Hornets opened the second quarter by going on a 9-0 run and, from that point on, the game became very competitive as both teams traded the lead back and forth and the Hornets went into the locker room with a 47-50 deficit.

The Hornets came out in the second half and played inspired basketball, jumping out to a lead on a 13-6 run to open the third quarter. Both teams cooled off during the last half of the third period and the Hornets were down 70-78 going into the fourth quarter.

There was some exciting basketball in the fourth quarter, particularly down the stretch, as the Hornets had to make a series of big shots and defensive stops to even the score at 97-97 with 9.9 seconds left on the clock. Paul Millsap missed a mid-range jumper over Marvin Williams as time expired in regulation, sending the game into overtime.

The drama continued into the overtime period with the Hornets opening up a six-point lead, but the Hawks fought their way back into the game. Atlanta’s Mike Scoot missed a three pointer from the left corner with time running out but Atlanta got another chance after ball was called out on Kemba Walker. Scott got the ball on the inbounds pass and hit from the right corner with about three seconds left in the game and Walker missed a last second attempt from just beyond the top of the key as time expired, sending the game into double overtime.

Walker had another opportunity to hit the game winning basket at the end of the second overtime period, but Jeff Teague had him locked up and he missed a floater and a second chance shot in the paint, and the Hornets got charged with a 24-second shot clock violation, giving the Hawks a chance to win it with 2.7 seconds left. An offensive foul before the inbounds pass gave the ball back to the Hornets with those same 2.7 seconds left, and Lance Stephenson hit his first three pointer of the year from 33-feet to give the Hornets a 122-119 victory!!!

Overall, looking at the numbers, you’d think that Charlotte ran away with this game; the Hornets led 51-38 in rebounding, 22-11 on second chance points and 58-38 on points in the paint. Numbers that skewed typically would lead to a win, but it was scrappy defense combined with Atlanta’s ball movement and 13-33 shooting from long range that helped keep them in this one.

Stephenson played more aggressively in this matchup getting to the basket, moving well without the ball and even walking away from a confrontation with the Hawks Paul Millsap in the second quarter. The Hornets’ leading rebounder cleaned the glass again in this one, finishing with 13 boards to go with 17 points and four assists.

Al Jefferson continued to put on a clinic on the low block with his old school post moves and he finished with a season high 34 points to go with nine rebounds, three assists and two blocks. Walker finished just short of a triple-double with 15 points, 10 assists and nine rebounds, including some big plays that helped keep Charlotte in the game late.

Gary Neal provided another steady dose of offense for the Hornets, scoring 23 points off the bench and shooting an efficient 6-11 from the field while knocking down 8-9 free throws.

Cody Zeller had a fantastic game with 10 points, five rebounds and two blocks, but it was his energy and hustle that really stood out in this game. More importantly, Zeller made the plays that don’t show up on the stat sheet as he was ubiquitous for the Hornets, making big plays down the stretch when Charlotte needed them.

Michael Kidd-Gilchrist returned for his first action since suffering a rib contusion last week against New York; he played strong defense and finished with 10 points and four rebounds.

Gerald Henderson did not play in the game for the Hornets; coach Clifford basically attributed it to a glut at the wing position. He has to play Kemba, Lance and Gary Neal, but apparently he really likes what he’s seen from P.J. Hairston and stated that he wants to get the rookie in the game more often. He complimented Hendo on his professionalism in the situation and said he wasn’t sure how this rotation would pan out in the long run, just that he wants to get Hairston more minutes.

The Hawks played efficiently on the offensive side of the ball, with a motion offense predicated on drive and kicks led to open shots, particularly from the corners. Jeff Teague had a great night for Atlanta, scoring 22 points to go with 15 assists and Al Horford led the Hawks in scoring with 24 points. All five starters were in double figures for the Hawks as they got very little production off their bench.