The Charlotte Hornets made their first appearance of the preseason in Philadelphia on Wednesday night but ultimately fell to the Philadelphia 76ers, 106-92.

Coach Steve Clifford got a good look at his starting unit as all five starters played at least 20 minutes a piece.  As a group, they only managed to shoot 18-50 from the field, while the team as a whole shot 36.8% from the field.  Make of that what you will; it was the first game of the preseason with a starting unit that features two new additions in Marvin Williams and Lance Stephenson.

Gary Neal was the Hornets most efficient player for the Hornets, leading the team in scoring with 14 points and shooting 5-8 from the field off the bench.  The backcourt tandem of Kemba Walker and Stephenson scored 13 points a piece as they seemed to play well off each other and Michael Kidd-Gilchrist showed off his reformed jump shot scoring 11 points while adding seven rebounds and two steals.  Big Al Jefferson chipped in nine points and eight rebounds.

We got our first look at our new starting power forward Marvin Williams, who was brought in to be a stretch four, and he certainly didn’t shy away from the arc, shooting six 3-pointers but only making one to give him five points to go with eight rebounds.  Rookie P.J. Hairston showed off his range, shooting 2-5 from three for six points, but also rounded out his game with four rebounds and four assists.  The Hornets other first round pick, Noah Vonleh, sat out the game as he continues to rehabilitate after an offseason injury.

Shooting woes aside, the Hornets played well in the first quarter and led 24-21.  In the second quarter, they allowed their opponent to go on a run in a 38-point second quarter that gave the Sixers a 59-47 lead at the halfway point.

At times, you could see the Hornets experimenting with their pace of play and Stephenson got his share of ball handling duties as the team played off the dribble more than they had last season.  On defense, the Hornets looked lost at times, which was not typical of a team that ranked near the top in team defense last season but, as I have said earlier, it’s preseason.

The starters didn’t see much time in the second half of the game as the reserves mostly led the way.  Second year center Cody Zeller had seven points and four rebounds and newly acquired backup point guard Brian Roberts had seven points and two assists off the bench for the Hornets.

The Hornets Gerald Henderson sat out the game with a right hamstring strain while the Sixers’ Carter-Williams was nursing a sore right shoulder after having offseason surgery.

The Hornets are back in action against the Washington Wizards at 7 p.m. on Friday in Greenville, S.C. 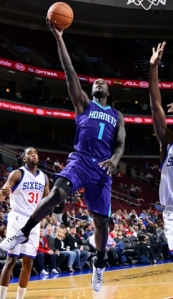