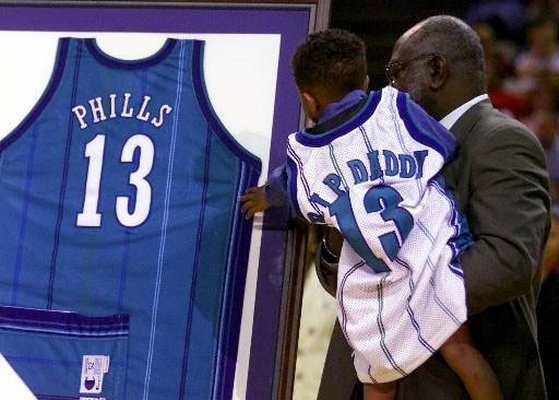 Every Charlotte Hornet fan remembers where they were on January 12, 2000 when they heard of the traggic car accident that took Bobby Phills’ life. Every Charlotte Hornet fan remembers February 9 when they retired the #13 jersey up into the Charlotte Coliseum rafters.Framed jerseys were presented to Kendall Phills (his wife) and Bobby’s parents, Dr. and Mrs. Bobby Phills Sr. The inscription read, “Son, Husband, Father, Teammate and Friend.”

“This tribute by the organization was put together as a way to remember Bobby as a player and as an active member of the Charlotte community,” Sam Russo, Hornets executive vice president of business, said before the ceremony. “His jersey hanging from the rafters will be a constant reminder to everyone walking into the building of what a positive role model he was.”

David Stern said, “Bobby Phills represented the very best of the NBA. We all know Bobby was a talented and competitive player. But he was also one of the most respected members of the NBA, a valued teammate and a caring member of the community. He will be greatly missed by the entire NBA family and basketball fans around the world.”

Bobby Phills was a leader on and off the court and an icon for the Charlotte Community. His family, Kendall Phills and his two children Bobby Phills III and Kerstie still live in Charlotte and we should bring his legacy back home where it belongs for them.

We would like to petition for the Charlotte Bobcats (soon to be Charlotte Hornets) to begin negotations with the New Orleans Pelicans to bring Bobby Phills’ jersey to the rafters in Time Warner Cable Arena.