Anybody who remembers the Hornets noticed a slight change in the Teal of the jerseys through out the years. it wasn’t extreme enough for us not to consider it teal or get upset. With the upcoming name change a lot of people are showing concern because of the “Buzz City” campaign is more of a Carolina Blue & Purple as opposed to the classical Teal & Purple we are all so fond of. In my opinion I think this a just a transitional color for this year because the Bobcats already have a Carolina Blue in their scheme and it would really clash if you saw the cheerleaders wearing Bobcats shorts which are Carolina blue and then a teal shirt. You have to admit it would be too much going on for right now.

For the time being this gives the instant memory of the Hornets without interfering with their aesthetic  appeal for the last season. This being said who knows what the Marketing department is thinking and has planned for the future Hornets. I personally can only hope and pray that it is teal. A lot of people have asked us to start a push at the Bobcats to make sure this happens. I don’t think that is appropriate until we have some real proof that they are indeed going with this Blue.

Remember Carolina Blue was a part of the original Hornets scheme but it was only appropriate because Alexander Julian also threw in the Duke Blue in respect to both teams that created a rich college basketball history in this state. IMO if you use one, you have to use the other.

Some want to create a new look for the Hornets. Some say if it isn’t broke don’t fix it.

What Do You Think? 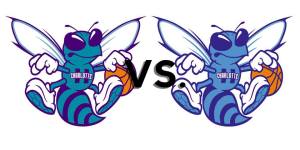