So far, so good in Buzz City.

The Hornets sit at 4-1 five games into the season, with their only stumbling block being a loss to the Boston Celtics in their home opener. They have managed to compile this record despite suffering a few injuries along the way to some key pieces to the team.

After a strong debut in the Hornets first game, Roy Hibbert has remained sidelined with what has been described as “knee soreness,” which can certainly be cause for concern for a big man, particularly in the early stages of the season. The Hornets have managed to play well on defense despite his absence; they rank fourth in the league in defensive efficiency, allowing a stingy 95.4 points per outing while also ranking near the top in blocked shots as a team.

As well as Charlotte has played thus far, it would probably be in their best interest to take their time with the veteran big man in order to preserve him for the latter part of the season as he was ultimately brought in to be the veteran defensive stopper the Hornets lacked in the playoffs last season.

Guard Jeremy Lamb is also out nursing an injured hamstring. He is initially listed as being out for 1-2 weeks but, hamstring injuries can be nagging, so it wouldn’t be surprising to see the team be cautious with this one also.

Moving on to the early successes of the team, the Hornets have notched victories against Milwaukee, Miami, Philadelphia and Brooklyn. While that isn’t necessarily murderers row, it IS four W’s in the win column, and I think Hornets fans will take a start like this any day of the week.

This team underwent an offensive renaissance last season, after years of setting the tone with their defensive identity, by spreading the floor and adopting a four-out, one-in approach that helped them to a good playoff showing last year. While the offensive principles remain basically the same this year, the team seems to have balanced the focus out better this season, with an emphasis on both sides of the ball and their record boasts the results of that renewed focus.

The team has four games coming up in the coming week after a leisurely start to the season. The Hornets start a three game homestand Monday against the Indiana Pacers who, after a slow start to the season, are coming off a strong showing against the Bulls. It will be a homecoming of sorts for former Hornets big man Al Jefferson, but most of the focus will be on superstar Paul George, point guard Jeff Teague and emerging young center Myles Turner.

Next up will be a second home game against the Utah Jazz. They are another young, up-and-coming team that plays a style similar to the Hornets. They also feature an emerging star big man in Rudy Gobert and forward Gordon Hayward, who is a cognitive piece to their offense, has just returned from injury and looks to be picking up where he left of last season. Newly acquired point guard George Hill is having an offensive resurgence in Utah, leading the team in points and assists.

To finish off the homestand on Friday night, the Toronto Raptors come to town. They are a top five defensive team, they are battle tested and they will be a legit test from a strong playoff contender for the Hornets. Guard DeMar DeRozan has been on an absolute tear this season so far, leading the league in scoring at the moment with 33.7 points per game.

That game should serve as a good springboard for a Sunday afternoon tilt with the defending NBA champion Cleveland Cavaliers. I obviously don’t have to build this one up much, this will serve as the teams biggest test of the season as the Hornets match up with the likes of LeBron, Kyrie Irving and Kevin Love. As of now, the Cavs sport the leagues only undefeated record at 6-0, and their offense is clicking as they are leading the league in scoring at 112.3 points per contest.

Those are four tough games on the schedule in the next seven days and they should serve to show us what kind of team we really have this season in Charlotte. Realistically, I can see them coming out of this four game stretch with another three victories, but that will take disciplined play.

The Hornets can ill afford to have slow starts to these games as they did against Brooklyn on Friday. These are all strong defensive teams and if we allow them to set their defensive tone early, it will be tough to get things going afterwards. 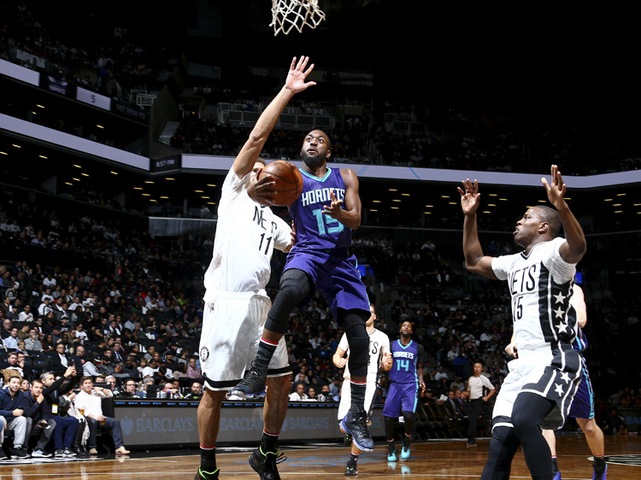 Now that all that is out of the way, let’s boast about this team a little bit.

Nic Batum has recently appointed himself as the head of the “Get Kemba to the All-Star Game” committee. (*while having the all-star game here would certainly help his cause…cough, cough*) Walker has had an efficient start to his season so far, averaging 24.4 points per game to go with 4.6 assists and three boards per game. He is shooting more efficiently this season and it’s obvious how much the team trusts Kemba down the stretch.

Meanwhile, Batum is filling the stat sheet across the board and MKG has injected a spark into this team on a nightly basis while leading all small forwards in rebounding with 9.2 boards per game.

Cody Zeller has played efficiently and Frank the Tank is getting the opportunity to show off the versatility that led the Hornets to draft him. Marvin Williams hasn’t had the best start to the season, struggling with his shooting in a few games, but he has so far shown a penchant for making the right shots when we need them the most.

Belinelli has seen his minutes increase with the absence of Lamb and he has answered the call with his court vision and basketball IQ that made him a player that Cho has coveted.

Even Spencer Hawes, the player most often brought up in Hornets trade scenarios, has shown where he fits in on this team. Hawes isn’t going to wow anybody with his athleticism or his man bun, but he does have an accurate shot with range and an incredible basketball IQ as well. He has filled in well during Hibbert’s absence and he has provided a steady hand in the Hornets strong start to the season.

And then there are the intangibles; the chemistry and culture that this team has built in the locker room is conducive to winning. On Friday, former Hornet Jeremy Lin echoed the sentiment from last season that the Hornets locker room is how all NBA locker rooms should be. He’s not the first player, current or former, to comment on the chemistry this team exhibits. Coach Clifford has helped build a culture in Charlotte that the players can buy into, and that’s something that takes time and enough belief in each other to handle the responsibility they’re given.

While the teams 4-1 jump out of the gates is very encouraging, this week’s slate of games can help us get a better scope of what we have in this team. We’ve got a good thing going here at the Hive this season, so sit back and enjoy the view from up here Hornets fans. Until next time, KEEP BUZZIN’!!!