On October 3, Gilchrist suffered a separated right shoulder during a preseason game against the Orlando Magic. Doctors said that the Hornet forward would not make it back to play in the 15-16 season, but Gilchrist recovered much faster, and is back before the all-star game.

In his first game back, Gilchrist had a solid debut, finishing with 13 points and 7 rebounds. Although, the Hornets didn’t have enough fire power to take down the Blazers.

In his second game back, Michael really found his shot. His new shot. The biggest limiting  factor in his success in the NBA, has been his shot, which has been ridiculed for it’s poor form. 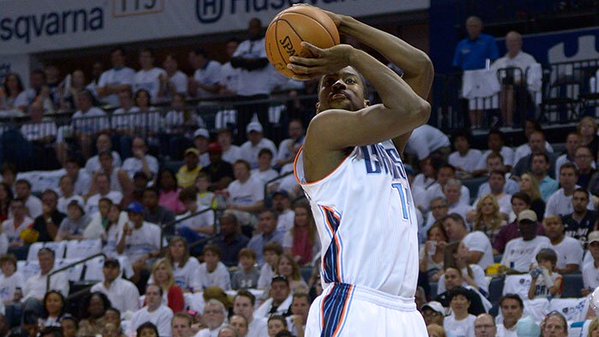 But Gilchrist has worked to completely rebuild his shot. In 2013, the Hornets hired NBA great, Mark Price, as a full-time assistant. Known as one of the best shooters in league history, Price’s job was to build Gilchrist a jump shot. You can read the full story of Gilchrist’s shot in a fantastic article by Lee Jenkins, found here:  http://www.si.com/nba/2015/02/05/michael-kidd-gilchrist-hornets-kentucky-shot-voice

In Sunday nights win against the Lakers, Gilchrist displayed this new shot. Michael finished the game with 19 points, 12 rebounds, and three assist. The most impressive part of the night was that he also hit two three pointers. Two three pointers. This may not seem very significant as we are in an era where Stephen Curry averages five a game. But for Gilchrist, this is a huge stepping stone.

Previously to Sunday night, Kidd-Gilchrist had played in 196 NBA games. In those 196 games, he made 3 three pointers. That’s right, three.

In the matchup against the Lakers, Gilchrist nearly matched his career total in three pointers. His new and improved shot should make Hornet fans very excited. Gilchrist is already one of the best defenders in the NBA, an excellent rebounder, and extremely athletic. If you add a jump shot in there, he may be on his way to NBA stardom. After being selected second in the draft, Gilchrist hasn’t quite found his niche in the NBA. Especially in comparison to the number one pick and former Kentucky teammate, Anthony Davis. Now with a new shot, Michael may finally find his place in the league.