Last year, I failed to make it to a Hornet’s game, so Wednesday nights game against the Celtics was my first game in the new hive. Although the Hornets played as if they were still the Bobcats, it was a great pleasure to see how much things have changed since the return of the Hornets. There seems to be a new found energy in the crowd at Time Warner Cable arena that wasn’t there when it was home to the ‘Cats. 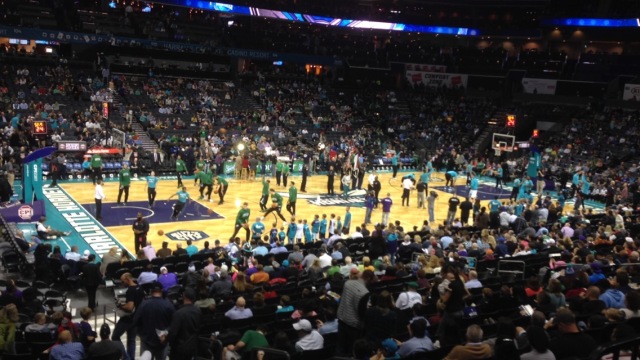 As for the game, I was disappointed to not see the Hornets come together and play as a team as they have in other games this season. There just seemed to be no flow in the game and the Hornets reverted to playing one on one, isolation basketball. Every time the team started to get something going, it was like the momentum would be immediately crushed by one thing or another.

P.J. Hairston started the game but only ended up playing twelve minutes as he couldn’t knock down wide open shots while giving up multiple offensive rebounds to the Celtics.

The Hornets couldn’t get any rhythm in the first quarter as they were taking terrible shots, and the good ones they did take, just wouldn’t fall. They also were called for four 3 second violations (They still call those in the NBA??) in the first quarter, which is just absurd.

The game was never really close at any point, and the Hornets fell behind by 20 in the 3rd quarter. The team tried to make a run for the game in the fourth but comeback hopes were squashed when a Frank Kaminsky and-1 was overturned and called an offensive foul. There were also two clear blocks by Hornet players that were called fouls and sent Boston players to the line.

Frank Kaminsky was the high scorer for Charlotte as he had a career high of twenty-three. It was an impressive night for Frank, but it also highlighted his need for future improvement. Kaminsky may have dropped 23, but he also took twenty shots and missed multiple attempts that I feel like he should of made. It was great though to see him knock down some long balls, and showcase some post moves.

Frank Kaminsky had a career-high 23 points (9/20 on FGA) in @hornets loss to BOS. pic.twitter.com/9RAGKuwfVU

I was also disappointed that Jeremy Lin was not rocking his signature mohawk on this night and had his hair down. Lin, alongside fellow guard, Kemba Walker, couldn’t get anything going, between the two, they shot a lowly 30%.

The Celtics are no slouch of an opponent as this is the second time they have beaten the Hornets this year. Boston had a very distributed scoring output, five players finished in double figures: Olynyk (20), Crowder (19), Bradley (18), Thomas (18), and Lee (10). After a disappointing last couple seasons, the Celtics have played well, starting the year 16-13.

It was good to see Physco T get some playing time, Hansborough played solid defense and grabbed three rebounds in eight minutes. Surprisingly, Tyler had the highest +/- of any Hornets player on the night.

There was also some brotherly love in the post Wednesday night. Hornet’s forward, Cody Zeller, got to match up with his brother, Tyler Zeller, who plays forward for the Celtics. Cody had the better game as he had seven points, ten rebounds compared to Tyler’s two points, one rebound. Tyler will have the bragging rights at the Zeller Christmas though, due to his Boston team being 2-0 against Charlotte. 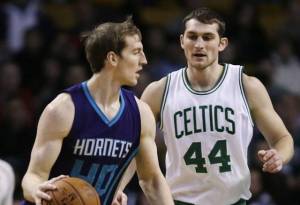 After a hot start to the season, the Hornets have cooled down. Just last week the team was found in the top five in the East, but have dropped to tenth after losing five of the last six. Looking forward, hopefully the Hornets can get back on track. The team has been without their center, Al Jefferson, for a month.  It was clear to me how much the Hornets missed their big man. The absence of Big Al left the team with no real big men, and no dominant rebounder. Hopefully his presence will help Charlotte return to their winning ways.

From all of us at the Hornets, Merry Christmas and happy holidays #BuzzCity! pic.twitter.com/bY6hcD1ZYH

Hugo the Hornet showed up ready for the Holiday buzz on Wednesday night.